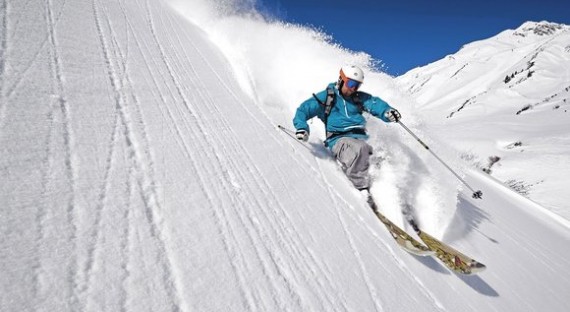 It sounds preposterous. A weekend ski trip? Youâ€™ll hardly have time to get your goggles on before you have to repack your suitcase.

But think about it. Youâ€™d do it for Paris or Rome: why not Chamonix or Courmayeur? Yes, itâ€™s going to be a little manic. But this is skiing, right? You donâ€™t love it because itâ€™s slow.

Here, Iâ€™ve picked seven superb weekending resorts, telling you how far they are from the airport. But first a few ground rules.

No beginners. A weekend isnâ€™t long enough to find your ski legs.

Book at least one day off work. Give yourself a little wiggle room. This is supposed to be a holiday.

Aim for mid-December, January or March. In the school holidays, itâ€™s hard to find hoteliers whoâ€™ll have you for less than a week.

Choose a resort within two hours of the airport. Transfers any longer than that are a drag, especially if youâ€™re the one doing the driving. So donâ€™t bother with resorts in the middle of the mountains, even if they are of the calibre of Val dâ€™IsÃ¨re.

A ski-in, ski-out hotel is the most efficient option, but sharing a self-catering apartment will cut costs. Just make sure you get the fridge stocked on the first night, as faffing about the following morning looking for coffee and croissants is going to waste valuable time and cause arguments.

Bring your own ski boots. Every minute you spend trying on rentals in the resort means six or seven fewer joyous turns on the snow.

A little pre-trip fitness training goes a long way, especially if itâ€™s your first outing of the season. You want to hit those pistes flying and not be throbbing the next day.

And sorry to be a killjoy, but do keep a lid on the aprÃ¨s-ski on Friday evening. Donâ€™t lose half your holiday to a JÃ¤gerbomb hangover.

For easy skiing: La Clusaz, France; 70 minutes from Geneva
If youâ€™re in the market for easy pistes and a rustic atmosphere, make for La Clusaz. Set in a rolling landscape of forests and pastures with sawtoothed crags above, its strongest suit is its intermediate-level skiing, closely followed by the local reblochon and abondance cheese. So, as well as making big, flashy turns on its ego-boosting pistes, you might want to add the odd fondue to your itinerary. If the sunâ€™s out, the terrace at the HÃ´tel-Restaurant La Ferme, just above the village square, is the place to eat (fondue from Â£13pp; lesfermiers.com).
Three nights at the four-star HÃ´tel Beauregard, from January 8, start at Â£677pp, half-board, including flights and transfers; 023 8020 6971, skiweekends.com

For lazy lunches: Courmayeur, Italy; 100 minutes from Geneva
Its mountain restaurants have made it a hit with ski-weekenders. For the full effect, grab one of the tables outside Maison Vieille. On one side, youâ€™ll have the southern face of Mont Blanc; on the other, the deep cut of the Aosta Valley. And on the table in front of you, how about a plate of spaghetti alla bottarga and a meaty bottle of red, suggested by Giacomo, the Tuscan owner? Saturday lunchtimes donâ€™t come much more spectacular than this (mains from Â£13; maison vieille.com). Besides lunch, thereâ€™s a pocket-sized area of steepish pistes, perfect for a two-day ski.
Three nights at the three-star Hotel Maison St Jean, from January 14, start at Â£428pp, B&B, including flights and car hire; 020 7371 9111, momentumski.com

For partying: St Anton, Austria; 70 minutes from Innsbruck
St Anton guarantees a full-throttle experience, thanks to its energetic party scene and sensational slopes. Thereâ€™s everything here from the steady pistes of the Rendl sector, through the plunging Kandahar black, to the white-knuckle off-piste runs on the Valluga. If youâ€™re leaving the groomed snow behind, be sure to hire a guide: from Â£93pp for a day (pistetopowder.com). Innsbruck airport is closest, but ZÃ¼rich works, too.
Three nights at the Chalet Amalien Haus, from January 7, start at Â£865pp, chalet-board, including flights and transfers; 020 8939 0862, flexiski.com

For off-piste adventure: Argentiere, France; 70 minutes from Geneva
Just to stand in the Chamonix Valley and look up at Mont Blanc and the Aiguille du Midi is worth the price of the flight ticket. But donâ€™t gawp for long, because Les Grands Montets are calling, home to some of the best lift-serviced off-piste skiing in the Alps. Hire a guide â€” from Â£88pp a day for up to four skiers (chamonix-guides.com) â€” and make sure youâ€™re on the first lift each morning. If thereâ€™s fresh snow on the mountain, you need to get there early. Or else youâ€™ll find the powder has been skied into lumps by the locals.
Three nights at the four-star HÃ´tel Les Grands Montets, from January 15, cost Â£525pp, B&B, including flights and transfers; 020 3397 8450, snow-wise.com

Load up on carbs in foodie Courmayeur (Alamy)

For speed: Innsbruck, Austria; 15 minutes from Innsbruck airport
Innsbruckâ€™s airport is not near the Alps, itâ€™s in the middle of them. Step off the plane and you can actually see some of the slopes youâ€™ll be skiing. To the north lie the heart-in-mouth steeps of the Nordkette. To the east, thereâ€™s the Patscherkofel, where Franz Klammer won gold in the 1976 Olympic downhill. Both can be reached by public transport from the city centre, but youâ€™ll want to hire a car so you can drive to the Stubai glacier on the second day. Its broad pistes and soft high-altitude snow are the perfect place to try out your most extravagant carving turns.
Three nights at the five-star Grand Hotel Europa, from January 15, start at Â£170pp, B&B, 00 43 512 5931, grandhoteleuropa.at. EasyJet flights from Gatwick start at Â£100pp return. Three daysâ€™ car hire starts at Â£43 with carrentals.co.uk

For powder: Engelberg, Switzerland; 80 minutes from Zurich
Pray for snow. Because if it comes, the Laub will be your playground â€” a freakishly long, smooth slab of mountain that drops through a muscle-melting 3,600 vertical feet. Yes, there are other big off-piste descents here â€” notably a half-day adventure known as the Galtiberg â€” as well as enough intermediate pistes to fill a weekend. But itâ€™s the memory of those never-ending powder turns that will turbo-charge your celebrations in the Yucatan bar back in town (bellevue-terminus.ch). Off-pisters will need a guide: from Â£50pp a day for up to eight skiers (remoguide.ch).
Three nights at the three-star Hotel Terrace, from January 14, start at Â£595pp, half-board, including flights and car hire; 020 7471 7700, skisolutions.com

Chair up: lift your spirits in Saint-Lary-Soulan (BARRERE Jean-Marc)

For value: Saint-Lary-Soulan, France; 70 minutes from Tarbes-Lourdes
Itâ€™s not just the Alps that work for weekends. Fly into Tarbes-Lourdes, or even Toulouse, and the Pyrenees are viable, too. Here, Saint-Lary-Soulan is a canny choice for budget-conscious intermediates searching for long, flattering pistes, gorgeous mountain scenery and a little bit extra beyond the snow. Stay in pretty, atmospheric Saint-Lary Village, down in the valley, and youâ€™ll get a state-of-the-art spa, Sensoria Rio (entry from Â£10pp; mercuresensoria. com), as well as quick lift access to the skiing.
Three nights in a self-catering apartment in the RÃ©sidence Les Rives de lâ€™Aure, from January 9, cost Â£70pp, based on four sharing; 020 7584 2841, ernalow.co.uk. Fly out on Saturday and back on Tuesday with Ryanair, from Â£36pp. Three daysâ€™ car hire starts at Â£50 with carrentals.co.uk