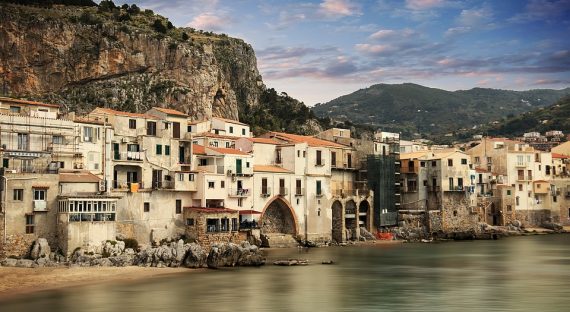 Italy is an amazing country, with rich cultural heritage dating back thousands of years. From the base of the Alps to the Mediterranean Sea, there’s a lot to love about this popular tourist destination. Traditions – and cuisine – are very dependent on which region you’re visiting; each waypoint along your journey will be just as exciting as the last. The love and care for family – especially children – can be found no matter where you find yourself.

For white sand beaches and beautiful blue waters, there’s no better place to be than one of the many islands along Italy’s coast.

The largest island in the Mediterranean Sea is home to some of Europe’s most elaborate architecture and identity. Prior to being introduced into the greater nation of Italy, rule over the island of Sicily passed hands several times. Each culture has left their mark on the island, leading to a unique blend that is all its own. From skiing down the slopes of the continent’s highest active volcano to sunbathing on the black pumice sands, the range of sights to see on this island is unlike anywhere else in the world.

Gorgeous cathedrals, mosaics, fountains and statues are just some of the architectural and artistic wonders to be found in the ancient trade city capitol, Palermo. If you’re in the mood for traditional Italian opera, the Teatro Massimo offers classical opera in the largest opera house in the country. Exploring Sicily can take a lot of energy: fortunately, the food here is known and admired around the world. Pasta and seafood lovers rejoice, you will find no better dishes than those directly from the source (and even the kids will love them!). Once you’ve used up all your energy during the day, you can kick back in one of the many luxurious villas Sicily has to offer.

If the bustle of the more heavily populated cities has you feeling a bit wound up, then consider making the journey out to the peaceful and serene island of Salina. Situated north of Sicily in the Aeolian archipelago, Salina is much smaller and quieter than the more prominent isle of Lipari. This area is rich in agricultural tradition, featuring sprawling vineyards and caper plantations to tour.

Salina isn’t easily accessible due to the isolated location, so be prepared for the journey. For those looking to get away from it all, there are few better places to be than this special island.

For a truer experience that’s still close to the more glamorous city of Naples, you shouldn’t miss the island of Procida. This small isle between the mainland and the much larger Ischia is a great place to stay if you want something more authentically Italian and Mediterranean. Less catered towards tourists, you’ll find a genuine charm here that wasn’t manufactured for wide appeal.

The picturesque scenery and deep blue oceans that surround this area can be found nowhere else on Earth. Generations old dwellings jut out into the majestic sea, creating a juxtaposition of the natural and man-made that is a wonder to behold.

There’s no place on the planet quite like the Italian isles: very few locales offer the same antiquated charm and friendly faces. There’s something for everyone to enjoy along the shorelines and through the ancient cities. Don’t miss out on your opportunity to explore and enjoy Italy to the fullest with the entire family!