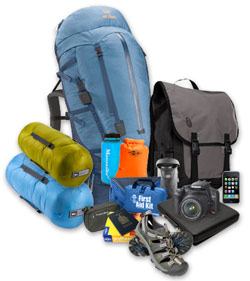 From an electric suitcase to a watch that cures jetlag, Katie Bowman reveals 10 revolutionary bits of kit

1 Dr Dreâ€™s headphones
Noise-cancelling headphones are now 10-a-penny and cost as little as Â£20. Trust us, they donâ€™t work. For genuine results, you need to spend cash â€” oh, and hire a rapper. Dr Dre was involved in the design of these sensational Monster Beats headphones, which donâ€™t just cancel out environmental noise (you canâ€™t even hear your feet on the floor when you walk), but deliver the sound quality a musician would expect in the studio. The performance is outstanding and the styling even better â€” the headphones fold in half and fit in a dinky carry case.
Details: Â£275; 0844 800 9595, comet.co.uk

2 Cinema glasses
Once you get over the embarrassment of wearing these, thereâ€™s no looking back. Plug the Vuzix iWear glasses into your portable DVD player, iPhone or games console and you can watch movies as if they were playing on the big screen â€” to be precise, a 67in screen that you are sitting 9ft away from. The glasses also come with detachable earphones, a godsend for noisy flights (especially those with nosy neighbours). The only hitch? The glasses donâ€™t sit flush on your face, which means light gets in. Not very cinematic, and wearing a towel over your head just wonâ€™t cut it.
Details: Â£250; 0844 922 1010, firebox.com

4 The watch that tells you when to sleep
When you get that awful feeling at 6.45am that youâ€™d be okay if only you could have 10 minutes more in bed, you could be right. Waking up at the wrong point in a sleep cycle is undesirable, particularly when you have jet lag. The Sleeptracker watch monitors subtle bodily signals such as respiration and muscle relaxation, then works out the best time to wake you up. Just set the alarm to within a manageable window of time and the Sleeptracker will choose the optimum moment to rouse you. Itâ€™s not the sexiest thing youâ€™ll ever wear on your wrist, but the extra shut-eye is worth it.
Details: Â£135; 01206 767300, sleeptrackerpro.co.uk

5 Fingerprint memory stick
The Leyio is a too-clever memory stick with built-in security (you access files with your fingerprint); greater privacy (you hand-pick which files to share on the mini LCD screen, rather than displaying them all on a PC), and no wires (you can transfer files from Leyio to Leyio with the flick of your wrist). Perfect for James Bond travellers or forgetful civil servants.
Details: Â£129; 0845 604 9049, johnlewis.com

6 WiFi detector T-shirt
You wear the T-shirt and the T-shirt detects the WiFi. It needs three AAA batteries inserted into the seam, then it does what itâ€™s supposed to (and saves you having to turn on your laptop in McDonaldâ€™s, only to find thereâ€™s no signal). The red bars light up as the signal strengthens â€” when it was really strong, the central logo on the shirt lit up, although it soon turned off again on a walk through the park.
Â£25; 0844 800 1965, gadgetshop.com

7 The first elegant underwater camera
It seemed wrong to put this to the test â€” the Pentax Optio W80 is a lovely-looking thing that claims to be waterproof, shockproof, dust-proof and cold-proof, so the last thing you want to do is smash it about. Still, a test is a test, and it passed with flying colours, withstanding an hour in the freezer and a swim in the bath. It looks nothing like the waterproof cameras of old, with their bulky plastic housing. Buy this if you are a messy, active or Arctic traveller.
Â£270; pentax.co.uk

8 Tiny cam
This miniature video camera â€” and miniature means the size of a cigarette lighter â€” wonâ€™t win you a National Geographic award, but itâ€™s great for adventure travellers. Attach the Muvi Micro action camera to your helmet or collar and you can capture every second of your bungee-jumping madness. Better still, if you want to film, but donâ€™t have your hands free, you can activate it with a preprogrammed voice control.
Â£80; 0844 800 1965, gadgetshop.com

9 Your TV â€” anywhere
Donâ€™t be ashamed â€” everybody secretly wishes they could catch up on Corrie sometimes, even if they are on holiday. The Slingbox Pro is a device that allows you to watch your favourite television channels on any computer, anywhere in the world. The performance can be iffy at low broadband speeds, so itâ€™s better if youâ€™re in a city-centre hotel than in rural Lancashire.
Â£155; 0800 496 1081, amazon.co.uk

10 Self-propelled luggage
This is the worldâ€™s first power-assisted suitcase â€” six years in the making and designed by an inventor whose mother died of a heart attack when carrying heavy cases through an airport. With an anti-gravity handle (based on the same physics as a wheelbarrow), the Hybrid PA takes 85% of the caseâ€™s weight in the wheels, instead of your arms, while two motors kick in as soon as the handle senses strain â€” up a hill or kerb, for example. The downside is the weight: 7kg when empty. Not Ryanair compatible.
Â£395; 01491 636393, liveluggage.com