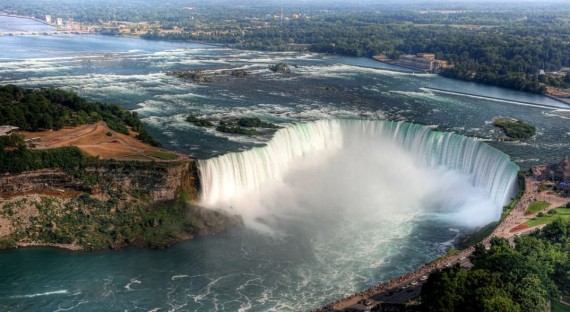 Weâ€™ve heard about the brave souls who plummeted over the Niagara Falls in wooden barrels, huge rubber balls and even on jetskis, but thereâ€™s a number of animals and inanimate objects that have gone for this wildest of rides too. If youâ€™re headed to the falls soon, restrain the urge to emulate these stunts and stay in the comfort of the Niagara Falls Marriott Hotel instead!

Fish regularly end up going over the falls. The upstream rapids are rich in foods and nutrients, which tempt the fish in, before they become disorientated by the swirling currents. They get caught up in the fast-flowing water and take the plunge. Most actually survive â€“ itâ€™s thought that the dense bubbles cushion them on the way down. They have been known to hurt tourists, though â€“ a salmon hit a visitor to the Cave of the Winds and grazed him!

At least the fish have a decent excuse, unlike Kirk Jones, who became the first person to survive the drop without any aid whatsoever. Heâ€™d been drinking with friends on October 22, 2003, when he cooked up his plan to swim upstream of the fall and get carried over while his friends filmed him. He made it with some minor injuries, but was fined $2,300 and banned from Canada for life. Ironically, his chums were too drunk to work the camcorder properly so thereâ€™s no footage of his idiocy.

On May 21, 2012, an unnamed man in his early 40s survived an unprotected jump. Apparently he climbed over a railing and jumped into the Niagara River. He was pulled from the water with cuts, a collapsed lung and broken ribs.

Hotel owner William Forsyth bought a schooner named Michigan in 1827. So far so good. Then, for some utterly unfathomable reason, he decided to stock it with a buffalo, two bears, two raccoons and a dog, as well as several geese and an eagle, before setting it adrift to reach the falls. The bears escaped and swam to Goat Island while the other animals â€“ apart from one goose â€“ died.

A cat called Lagara was sent over the falls of October 19, 1901 in a barrel and survived. It was a test-run ahead of Annie Taylorâ€™s ground-breaking stunt â€“ she became the first human to survive going over Niagara Falls in a barrel.

On July 5, 1930, Sonny the turtle travelled over the falls in a barrel with his owner, George Stathakis. They both survived the drop, but the airtight barrel became trapped behind the falls for hours, by which time Stathakis suffocated. Sonny, reputed to be 150 years old at the time, survived. To read more about turtles, click here.

A schooner called Superior was set to go over the falls on November 23, 1829 â€“ a deliberate stunt â€“ but it got caught up in whirlpools and was stranded in shallow water for a month until strong currents finally carried it over.

A few years later on December 29, 1837, the steamer Caroline was set ablaze and dropped over the falls during the Upper Canada Rebellion.