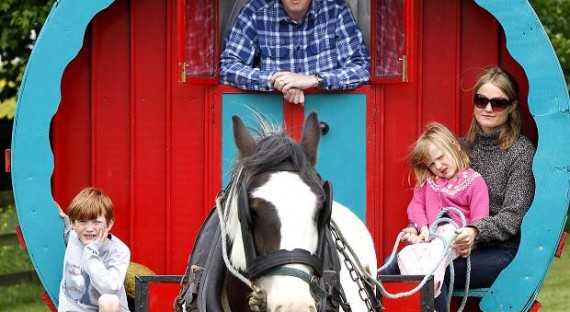 If you love a road trip, especially one where the opportunity to explore the country along the way at leisure takes precedence over arriving at the ultimate destination, a horse-drawn caravan holiday would seem, in many ways, the ideal family holiday.

Ever since reading Little House on the Prairie Iâ€™ve fancied the idea of clipclopping into the West. OK, so Galway might not be Indian Territory, but a pootle along the back roads of Ireland is a more sensible and less ambitious family vacation than a single-horsepower attempt to traverse the Great Plains.

A couple of years ago my kids had a peek inside the gypsy caravan in the garden of Roald Dahlâ€™s home that inspired Danny, the Champion of the World. From that moment they regarded it as rather odd that we had opted to live in a house. The romance of the traveller lifestyle is played out on a daily basis through my daughterâ€™s treasured Sylvanian Families caravan. But I still had doubts about this adventure. I was totally up for the caravan, just a bit concerned about the horse-drawn bit.

I have ridden a horse only once, about 15 years ago, and feel as if I have only recently stopped feeling saddle sore. I was astonished when I discovered that the episode had not rendered me incapable of fathering children.

While this holiday would not involve riding a horse it did, apparently, require me to be in charge of one for three days while it dragged me, my family and our home along roads containing traffic. Larry Gohery of Into the West Horse Drawn Caravans explained patiently that, no, he would not be accompanying us and that really it was all very straightforward.

My doubts were not assuaged by a colleague who recounted her own childhood experience of such a holiday. Frightened by a fast car, the horse bolted, catapulting her mother from the caravan, over a hedge and into a field from whence she was transported by ambulance. My colleague and her siblings spent the rest of the holiday in the care of friendly locals while her mother underwent surgery and began her long and painful recovery.

We met Larry at Cartron House Farm in Ballinakill, near Loughrea, in Galway, where he introduced us to Danny, a brown and white â€œtinkerâ€™s horseâ€ with many yearsâ€™ experience of hauling the likes of us around the countryside. Larry showed us how to harness Danny and attach him to the caravan. Driving Danny, it appeared, basically involved holding the reins, pulling left or right occasionally, saying â€œgo on, Danny!â€ or â€œwhoa, Danny!â€ and trying not to confuse the two.

We set off, with Larry at the controls to begin with. Danny fair trotted along. Then Larry dismounted and disappeared into a palâ€™s car and it was just us, Danny and the open road.

The reality is that Danny was in charge. Danny knew where he was going. Jaaypers! Heâ€™d been that way hundreds of times before. He knew those roads as well as he knew his own mind. And Danny certainly knew his own mind.

If Danny wanted to slow to walking pace, which he did pretty much as soon as the sound of his ownerâ€™s car had faded, then Danny slowed to walking pace. If Danny wanted to investigate the hedgerow for something to eat, then Danny stopped and investigated the hedgerow. If Danny wanted to respond to our exhortations to â€œgo on, Dannyâ€, then he responded. But if he didnâ€™t, well, then he didnâ€™t. Given that he was dragging a whacking great caravan, this seemed fair enough to a family who felt townishly guilty at the work Danny was putting in as they sat there watching the world go slowly by.

Danny pretty quickly sussed that we were a bunch of wusses who were never going to drive him hard and we worked out that the best way to ensure that he kept moving was for one or more of us to hop down, take the reins and lead him. He seemed to appreciate the gesture, or the company, and walked on happily. This may sound feeble, but it worked well for us. We kept moving, albeit slowly, and felt as though we were bonding with Danny. We stuck straws in our mouths and plodded on with our new friend, fancying ourselves to be taking quite comfortably to the life of itinerants from yesterEire.

Anyway, not being in a hurry was the whole point. The route was simple and clearly marked on a map, and we were covering only about 15 miles a day. We were sharing roads with cars but we were very much off the beaten track. Sometimes we went for half an hour without encountering anything but a boisterous farm dog, inquisitive cows or horses intent on showing Danny that they could out-run him any time. Caravans are a common sight in the area and drivers were mostly very considerate about overtaking and backing up to let us squeeze past on narrower byways.

We were surprised to get plenty of cheery waves. If the locals regarded our big fat gypsy holiday as an escapade for silly tourists with a cheesily romantic sense of Irelandâ€™s rural past, they hid it well. Probably they were pleased to see visitors spending euros. We trundled past endless new mansions, built in the boom and lying abandoned, a stark reminder of the economic woes that have consumed the country.

We soon got the hang of parking outside the occasional shop in a way that didnâ€™t blockade the place and I am now convinced that a horse-drawn caravan is the only way to arrive at a rural Irish pub and the safest way to drink and drive.

Arrangements had been made for us to stay at farms along the way. The farmer, or his wife, helped us to remove Dannyâ€™s harness, give him a bag of nosh and brush him down. He then went and rolled joyfully on the ground. So we got the experience of looking after our own beast but with someone else there to make sure we didnâ€™t get into trouble. This is just as well, as I never quite got the hang of all the harnesses. We were able to get a shower and even a cooked breakfast at some of the farms (be sure to have Annâ€™s full Irish brekker at Cartron House Farm before setting off).

The smaller people in our troupe were thrilled by the interior of the caravan and the snug accommodation it afforded. They loved sitting at the table inside, drawing and playing games and trying to communicate out of the back window with motorists marooned behind us on narrow roads.

The caravans have gas stoves inside and battery lamps. The table and the benches fold down to form two cosy double beds. Technically the caravan sleeps five, but the fifth person would have to sleep on what really amounts to a shelf.

At night we read Little House on the Prairie. Then we fell asleep to the sound of rain pounding on the roof and woke to hear Danny munching the grass outside. In the morning we opened the front of the wagon and he stuck in his head in search of a hello and whatever he could filch from our breakfast table.

After a couple of days we got to know Dannyâ€™s ways. The kids were delighted that everything stopped when he needed to urinate. Danny was not a horse who cared to walk and pee at the same time. As soon as he stopped, but didnâ€™t make a move for the hedgerow, there would be childish squeals of anticipation and he would proceed to flood the highway. Much speculation followed on how many buckets Danny could fill in one burst. A careful tally was kept of equine farts.

A couple of miles from the end of our journey Danny miraculously and dramatically picked up speed. It may have been that he scented home but I suspected he was taking the Mick (as it were). A trot turned into a canter. Applying the foot brake had no effect and we had to wait for the next hill for him to slow down. Then at the top he broke into a full gallop. With the caravan thundering along a very narrow lane, the wheels came perilously close to clipping the verge, an outcome that would have been extremely messy for all concerned. We clung on grimly, while our four-year-old daughter shrieked with delight and urged Danny to go â€œfaster, faster!â€

We arrived back at our starting point in a state of some exhilaration. We removed Dannyâ€™s harness, brushed him down one last time and watched him frolic in the paddock. It may have been my imagination but he gave every impression of being thrilled with himself.

The Delphi Mountain Resort, a hotel and adventure centre in the wilds of Connemara, is a great place to recover. It has well-appointed family suites, a good restaurant serving local meat and fish and a spa that does a great seaweed bath. Activities include sea kayaking, hiking, archery and zip-wiring in the forest. Delphi Mountain Resort (00 353 95 42208, delphimountainresort.com). B&B doubles from Â£120 per night.