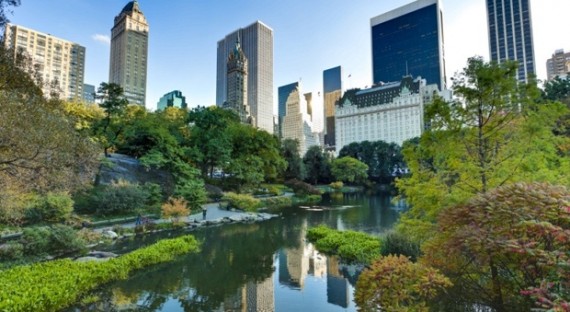 Donâ€™t be put off by the city heat â€” there are great hotel and restaurant deals, and thereâ€™s plenty to do outside, says Jane Knight

A balmy summerâ€™s night in New York, and weâ€™re catching a movie. Not that Iâ€™m watching the big screen much â€” the surrounding scenery is far too distracting. To our left, One World Trade Center, the tallest building in New York, sparkles on the night skyline of Lower Manhattan, while before us a boat chugs past on the Hudson river, all blue lights in the dark.

Weâ€™re at Pier 46 in New York, where the open-air rendition ofGhostbusters is just one of a number of free cultural events over the summer. There are free Shakespeare plays in Central Park, ballet performances and even outdoor performances from the Metropolitan Opera, but, for a family trip with my eight-year-old son, this big-screen showing â€” one of a number held in parks, on rooftops and other open spaces â€” is perfect.

Summer in this city isnâ€™t the most obvious choice of a break, but, as we discovered, itâ€™s a fun time to visit, with some great-value hotel rooms and lots of free or cheap activities. Earlier in the evening weâ€™d strolled along the High Line, the much-publicised rail route converted into a walkway. With spots to cool your feet in water, or to sit in loungers and watch the world go by, it was pleasant enough, but I found the modern artwork verging on the ridiculous and the walkway a bit like a conveyor belt of tourists.

A far better experience came at the end, in the Meatpacking District, where we spied a delightful Italian restaurant called Macelleria with an outside table to enjoy the early-evening atmosphere. Better still, it turned out that our visit was during New York Restaurant Week (actually more like a month) with fixed-price three-course menus of $38 (Â£25) for dinner and $25 for lunch. This was no second-rate meal either; the ravioli, organic chicken with fennel sausages, and New York cheesecake were delicious.

If our evenings in New York were mellow, our day trips were fun-filled, none more so than Coney Island, only a $2.50 ride away on the subway. Just 45 minutes after leaving central Manhattan, we were sitting on the stunning beach, the ocean in front of us, boardwalk behind. There were sandcastles to be built and paddling to be done before sampling the famous hot dogs from Nathanâ€™s. Iâ€™d recommend you delay eating until youâ€™ve ridden the rollercoasters at Luna Park. The newest, Thunderbolt, reaches a scream-inducing 55mph, but surprisingly is 5mph slower than the wooden-track Cyclone, which opened back in 1927. With 12 drops and a 60-degree plunge, it must have been amazing in the Twenties, and is still, in my opinion, the top ride.

While Coney Islandâ€™s attractions are iconic, Governors Island is less well known, probably because until last year it was only open during summer weekends. After visiting the moving 9/11 memorial in Lower Manhattan, we jumped on the ferry. Adults travel free on weekend mornings, and pay just $2 at other times; for under-12s itâ€™s always free. Once over, we hired a Surrey, a covered four-wheel cycle with, yes, a fringe on top, to tour the island. Itâ€™s easily done in an hour, including stops to snap the great views of the Manhattan skyline and the Statue of Liberty.

There was an open-air poetry festival on the island on our visit, and we caught snatches of sonnets as we headed up to the grove of hammocks to loll in the sun before exploring the numerous food trucks selling ready-made picnics. You can, apparently, take free kayaking tours of the Hudson from Governors Island, but although we saw the kayaks we couldnâ€™t find any evidence of activity.

No matter. On another day we got free views of Liberty Island and Ellis Island on the Staten Island Ferry. On our return, we found much of Sixth Avenue had been blocked off to traffic for a pedestrianized market, selling everything from T-shirts that lit up, to deep-fried ice cream.

New Yorkâ€™s fast food is made for summer snacking, but when we wanted something substantial without a restaurant price-tag, we hit Fairway Market, a supermarket with every kind of ready meal. No wonder New Yorkers donâ€™t cook. It was, conveniently, just over the road from our apartment in the Hotel Beacon, on the Upper West Side, which had its own kitchenette and living area â€” a lifesaver when tiredness swept over us.

That first night, when we walked across the road to the supermarket, it had been a temper-inducing 31C at 8.30pm and I had asked myself if summer in the Big Apple was such a good idea.

A storm cleared the air, however, making our stay fun-filled rather than heat-filled, and we saw a totally different â€” and cheaper â€” side to New York. Itâ€™s certainly a side I want to see again.

On Governors Island (govisland.com) Surrey rental costs $35 an hour for two. There is free bike hire every weekday from 10am-noon

Luna Park (lunaparknyc.com) charges $35 for a four-hour visit, or pay for individual rides

For sight-seeing, save money with a New York CityPass, with tickets to six attractions, from $114 per adult, and $89 per child, aged 6-17 (citypass.com/new-york)