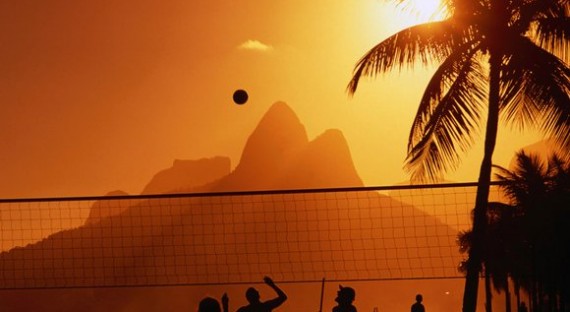 Day: Rioâ€™s legendary Ipanema is fashion-shoot Brazil: famous backdrop, beautiful creatures, skimpy bathing costumes â€“ and thatâ€™s just the guys. Like Copacabana next door, Ipanema isnâ€™t just a beach â€“ itâ€™s a world. You can have lunch, a massage, a new tattoo, a Samba class, a Pilates workout or a political debate. Alternatively, stick to simpler pleasures â€“ a grade-A tan, an ice-cold beer or an impromptu game of volleyball.

Get there: The Ultimate Travel Company (020 3411 1948,theultimatetravelcompany.co.uk) has a week in Ipanema from Â£1,823pp, B&B, including flights from Heathrow.

Or try: The Praia da Barra da Tijuca, with more than 12km of gorgeous sands, is one of a string of beaches that extends westward through the Rio suburbs into tropical rainforest. A less intense and less crowded introduction to Rio beach life, it still has the buzz of the city, with dozens of bars and restaurants. The Surf Bus (surfbus.com.br; Â£2) runs there every day from the central Largo do Machado metro station.

Day: In trendy Bahia, a back road leads south from the funky beach town of ItacarÃ© to a chain of fine beaches: Resende, Tiririca and Ribeira. From here, youâ€™re on foot, following a coastal trail through rainforest for half an hour to Prainha. Absurdly pretty, in a perfectly symmetrical bay, the crescent beach is backed by tilting palms. By day, there is a coconut stall. At night, thereâ€™s just the moonlight.

Or try: BÃºzios peninsula, a couple of hoursâ€™ bus-ride east of Rio, is the so-called St Tropez of Brazil â€“ cobbled streets and terrace cafes do give ArmaÃ§Ã£o town a Mediterranean feel. Each beach is more beautiful than the last â€“ but the most picturesque are Azeda and Azedinha.

Day: A fishing village thatâ€™s become a beach-bum magnet, Jeri has a young, chilled vibe and international renown. Itâ€™s still a village of sand streets, mind â€“ only itâ€™s one where you can get dreamy pistachio ice cream and pannacotta. Just along the sands, at Praia do PreÃ¡, is some of the worldâ€™s best wind- and kitesurfing; hire windsurfs from Club Ventos (00 55 88 3669 2288, clubventos.com; Â£49 a day) or book hour-and-a-half lessons for Â£64.

Night: The Pousada Cabana (00 55 88 9920 6658, pousadacabana.com.br; doubles from Â£45, B&B) has classic Jeri thatched cabanas that manage to be both rustic and comfortable, as well as a Jacuzzi pool and a jungle of exuberant plants.

Or try: South from Recife is a classic beachcomberâ€™s and surferâ€™s coast â€“ cafes serve the morningâ€™s catch and pousadas offer simple, inexpensive rooms. For windsurfing, it has to be five-kilometre-long Praia da Ponta de Serrambi. Hop on a bus from Recife to Porto de Galinhas (one hour; around Â£2), then hail a dune buggy (around Â£5) to take you down the coast.

Day: An archipelago of islands around 300km off Brazilâ€™s northeast coast, Fernando de Noronha is a marine national park famous for its pristine beaches. Instead of coconut stalls, beach cafes and sarong sellers, youâ€™ll find turtles hatching, rare seabirds nesting and dolphins cruising into the bays in their hundreds. Thereâ€™s stiff competition for â€˜best beachâ€™ here, but Praia do LeÃ£o has an exquisite balance of sand, blue sea and overreaching sky.

Or try: Nowhere else in Brazil has beaches like this but there are another dozen or so on the Fernando archipelago. Praia da BaÃ­a do Sancho, accessed only via cliff ladders, is like a secret world. The sands are pillow-soft; the waters emerald-green; the only sounds, birds, waves and wind in the pines above.

Day: South of Rio, Ilha Grande is a jungle island teeming with parrots, hummingbirds, monkeys and butterflies the size of dinner plates. A trail snakes across the island, emerging on Lopes Mendes, a wild three-kilometre scythe of sand where you can hire surfboards (around Â£10) â€“ the rollers are magnificent. Other than by foot, the only way to reach it is by boat from Vila do AbraÃ£o, the sole town on Ilha Grande.

Night: At Sagu Mini Resort (00 55 24 3361 5660, saguresort.com; doubles from Â£122, B&B), created by an Italian filmmaker who lost his heart to the island, hammocks hang on the balconies for post-dinner meditation on the stars.

Or try: Santa Catarina island, in Brazilâ€™s deep south, has some of the countryâ€™s top surf spots along its east coast. Fly from Rio to FlorianÃ³polis (around 90mins) to reach Praia da Joaquina, the scene of Brazilâ€™s national surf championships, then head south to the emptier, wilder Praia do Campeche.

Day: The hippest beach town in the northeast, 80km south of Natal, is a cluster of small-scale pousadas, funky cafes and smart boutiques that draw a global cast of beachcombers. Lunch at beachside Garagem (00 55 84 3246 2154; mains around Â£5) â€“ fresh fish, cold beer, good tunes â€“ then follow the retreating tide to Baia dos Golfinhos, where the dolphins play.

Night: Pick of the pousadas, Toca da Coruja (00 55 84 3246 2226,tocadacoruja.com.br; doubles from Â£185, B&B) has elegant thatched villas set in jungly gardens. In the evenings, when the scent of blossoms hangs heavily, follow the illuminated boardwalks to candlelit dinners or nights in a bar thrumming with forrÃ³ music.

Or try: Trancoso, a 15-minute bus-ride south of Porto Seguro, in the southern reaches of Bahia, is more exclusive than Pipa, but just as friendly and laid-back. Espelho is the best, with golden sands and reef-protected waters. Lunch on the dayâ€™s catch at Silvinhaâ€™s (00 55 73 9985 4157; around Â£13), a simple beach hut.