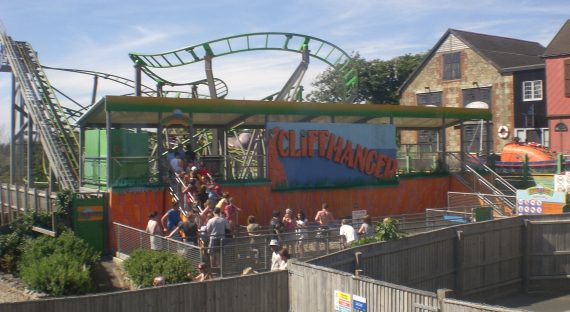 With seemingly hundreds of theme parks to choose from across the world, which ones offer the best all round experience for families? Well, after some intensive research Iâ€™ve come up with a selection which all have something special to offer.

The below selection are spread out across the world, but arenâ€™t chosen on any scale of favouritism â€“ theyâ€™re simply suggestions which you may want to consider as your next holiday destination. They all have their advantages, but all of them will offer you many happy memories in the years to come.

In the UK, this theme park is very much indeed a national treasure. It first opened its doors to the public in 1896, which means over its extensive history itâ€™s seen the country develop and has provided millions of families with happy memories.

These days, itâ€™s bigger than ever! Thereâ€™s quite literally something for everyone, whether this is thrill seekers or those looking for a quiet time â€“ Blackpool Pleasure Beach delivers on all fronts. It has spectacular rides, is situated next to the famous Pleasure Beach, offers excellent shows, and fine dining experiences. Itâ€™s a real treat and well worth considering a visit at any time of the year.

This is the UKâ€™s oldest amusement park, but itâ€™s one not many people will have visited. Itâ€™s on the Isle of Wight, just off the coast at the south of England. Amazingly, it first opened in 1843 and has been a steady hit with tourists ever since.

In recent years, Blackgang Chine has been adding increasingly spectacular attractions to its resort, such as the Cliffhanger rollercoaster in 2005. Due to its idyllic setting on the island, the theme park is as much about the Isle of Wight as it is the resort, so be prepared to have a look around local tourist hot spots as well as enjoying the sense of history.

This is one of the ultimate family experiences and an obvious choice for this list. However, itâ€™s worth pointing out the familiar old American theme park (which opened in 1955) now has many other international resorts to go with it.

As a result, thereâ€™s Disneyland Paris (which opened in 1992), but there are even more far-flung locations such as Disneyland Hong Kong and Disneyland Tokyo. There are more, too, so itâ€™s really a case of choosing where youâ€™d like to head in the world to enjoy the familiar and charming world of Walt Disneyâ€™s characters.

This American theme park offers some of the most eye-catching rollercoasters in the world. Whilst many of them are spectacular, theyâ€™re also extremely colourful. However, as with the best theme parks thereâ€™s something for everybody to do, including plenty of kidsâ€™ rides and events.

Cedar Point is based in Ohio. The 365 acre theme park is the second oldest in the US and is set to the backdrop of plenty of coastline. Itâ€™s a beautiful area and offers ideal activities for families, including family rides (like the Flying Ace Balloon Race), and events such as HalloWeekends.

As a colourful amusement park, it will certainly offer families a fun-filled trip to the United States.

Everybody loves Lego, which is why Legoland has been such a big success. There are plenty of resorts around the world, you simply have to make your choice and you could be wending your way to California, Dubai, Germany, or England (the UK branch is in Windsor).

With a huge selection of themed lands (such as Land of the Vikings, Pirate Shores, and Adventure Land), youâ€™ll find family friendly rides and activities. Vikingâ€™s River Space, the Spinning Spider, and Laser Raiders are particularly well known, but the theme parks have been designed to offer the ideal selection of relaxing activities and pulse pounding action for thrill seekers.

Obviously, with the Lego twist thereâ€™s an extra special edge over other parks which, arguably, only Disney can match. Unless, of course, you grew up watching Sesame Street.

Located in Pennsylvania, Sesame Place is based on the popular show Sesame Street. Itâ€™s been open since 1980 following the success of the childrenâ€™s television show, which does naturally mean itâ€™s extremely well suited to families with young children.

Thereâ€™s plenty to do, as youâ€™d expect, with all of the showâ€™s most popular characters available for children to visit. Which attractions like Elmoâ€™s Park, Cookieâ€™s Monster Land, and seasonal events, youâ€™ll be spoilt for choice on activities and your children will make many happy memories. If you also grew up watching the show (as I did), itâ€™ll also act as a memorable bit of nostalgia, as the show helped to make many happy childhood memories.